Boost your health and mental performance in just 10 minutes 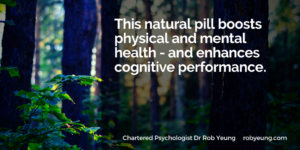 Research shows that it can take as little as ten minutes to improve our physical health, psychological wellbeing, and our mental performance.

All around the world, scientists have been discovering that simply spending time outdoors in nature has measurable, significant benefits for both physical and mental health. For example, an investigation led by Cornell University’s Genevive Meredith recently summarised the conclusions reached by multiple groups of researchers looking at time spent outdoors in countries such as Japan, Sweden and the United States.

The research team reported that as little as ten minutes of merely “looking at or being in nature has the effect of decreasing biological and self-perceived markers of stress.” People benefitted from sitting or standing still and looking around them at nature scenes – they didn’t have to do any exercise or even walking. And the benefits were measurable both in terms of how people felt (“self-perceived markers of stress”) as well as at the “biological” level in terms of indicators such as lower blood pressure and reduced levels of cortisol, the so-called stress hormone.

Of course, not everyone has easy access to hills and forests. But other research has found that even walking in urban outdoor environments such as a city park can be beneficial.

A study led by Diana Saadi at Tel Aviv University asked 72 adults to go for walks in different city neighbourhoods including an urban park, a residential area, and the city centre. As expected, the volunteers in the study benefitted the most from going to the urban park; they experienced significant improvements in both their physiological health and psychological health. But the study is notable because the volunteers were also tested on their cognitive performance – with the visit to the urban park actually boosting their working memory, their ability to juggle a greater number of mental concepts at the same time.

In other words, going for a walk even to an urban park led to boosts in terms of physiological health, psychological wellbeing, and mental performance. That’s a pretty powerful combination of benefits.

Studies have found that as little as ten minutes sitting in nature has benefits. But other research has found that even greater benefits from what has been called a nature pill may be achieved after around 20 to 30 minutes.

So there you have it: an all-natural ‘pill’ that lowers blood pressure, reduces levels of stress hormones, increases mental wellbeing, and boosts cognitive performance. And with no side effects either. Can you afford not to be taking the nature pill?