5 ways to deal with feelings of insecurity or inadequacy 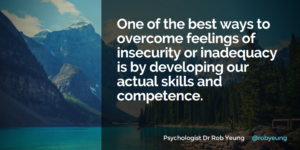 Many people feel insecure or inadequate. Others say that they lack confidence or have low self-esteem. But even when the words differ, the end result is often the same.

My book The Confidence Project provides a wide variety of both quick fixes and longer-term techniques for boosting confidence. But here are five different tips and ways of looking at things:

1. Be careful about using positive self-affirmations
Some gurus and life coaches recommend that repeating positive comments can help to make you feel stronger. For example, they often suggest repeating phrases such as “I have the qualities I need to be successful”, “I am blessed with many talents and skills” or “I am worthy of love”.

But there’s a major problem with this idea. A rigorous research study led by the University of Waterloo’s Joanne Wood found that such positive phrases actually damaged people’s feelings of self-worth.

Why does this happen? It’s likely that people who have low self-esteem are usually very much aware of it. So when they repeat phrases such as “I am courageous” or “I have the strength to achieve my goals in life” to themselves, it only makes them more aware of the fact that they do not actually possess such qualities. In effect, they are trying to lie to themselves but end up simply reminding themselves of what they are lacking.

So, if you want to feel less insecure, don’t repeat positive self-affirmations to yourself.

2. Work on your sense of competence
Both practising psychologists and researchers such as Bowling Green State University academic Christopher Mruk emphasise that feeling better isn’t just about using mental techniques and tricks. One of the best ways to feel more secure in life is by actually developing your skills – your competence.

To start working on your sense of competence, begin by spending 5 to 10 minutes writing about a time you demonstrated competence in dealing with a challenge or problem. It could be something from your work life or your personal life. It could have happened long ago or relatively recently. It doesn’t have to be a major problem or issue that you dealt with; just think back on any challenge that you are pleased you dealt with.

In writing about the exercise, remind yourself what the situation was. Then write about the actions you took. What did you do or say?

Don’t skimp on the exercise. Give yourself time to reflect on what you’ve achieved in the past and commit just 5 to 10 minutes writing about it.

Then, to further develop your sense of competence, keep a diary or log. Over the coming weeks and months, reflect at the end of every day on any ways in which you demonstrated your competence – your ability to overcome problems, issues and challenges both small and large.

3. See the world correctly
Often, people who feel insecure or inadequate see the world as more threatening than it really is. I’ve written before about toxic thinking traps that often can reduce people’s confidence.

Life may throw problems and difficulties your way. But why make yourself feel even worse by allowing yourself to fall victim to these sorts of thinking traps? Help yourself by reading that previous advice of mine so that you can understand and hopefully avoid these sorts of unhelpful ways of thinking.

4. Do good to feel good
In therapy sessions aimed at helping people to feel more confident, research collaborators Christopher Mruk and Edward O’Brien recommend a further activity, which they call “Doing Good, Feeling Good.” Essentially, performing acts of virtue – for example helping others – has been shown to boost psychological wellbeing.

So look for ways that you could help out an individual or a group of people in your life right now. Is there a neighbour or friend who would appreciate you helping them with their groceries or other chores? Is there a colleague who could benefit from your advice and guidance? Are there members of your family who feel lonely and might welcome a letter or a simple phone call? Could you donate your time or money to a charitable cause that means something to you?

Performing acts of virtue and kindness is a true win-win. Other people get something out of it. But plenty of studies also tell us that the people performing such acts incidentally develop their own sense of worthiness, too.

5. Remind yourself of your values
I wrote above (in point 1) that repeating positive self-affirmations or mantras may actually damage people’s psychological wellbeing. However, there is another technique – often confusingly called ‘self-affirmation’ – that may be genuinely helpful.

This is an entirely different method that has been proven in numerous studies to have significant benefits for not only people’s feelings about themselves but also their ability to achieve success in the real world. For example, studies have shown that when students worked through this written exercise, they actually went on to achieve better exam results than other students who did not do the exercise.

Rather than using the confusing name of ‘self-affirmation’, I prefer to call it a key values audit. And here’s how to do it.

I hope that those five pointers are useful. However, do remember that I’ve also written plenty of other pieces on dealing with insecurity or inadequacy and building your confidence.