Is it better to take notes by hand or by computer? 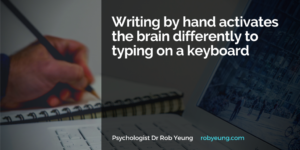 When I meet with a client face-to-face, I tend to write notes using pen and paper. When I’m sat at my computer, I usually take notes using my keyboard. But what does the science say about the effectiveness of pen and paper versus keyboard and screen?

Researcher Audrey van der Meer at the Norwegian University of Science and Technology has run several studies using electroencephalogram (EEG) equipment to scan the brains of both adults and children. In one study, both the adults (who were in their mid 20s) as well as the children (who were 12 years of age) had their brains scanned for 45 minutes while either writing by hand or typing on a keyboard.

The researchers found that handwriting led to much more brain activity than typing on a keyboard, probably because writing uses more of our senses than typing. Professor Van der Meer reported: “A lot of senses are activated by pressing the pen on paper, seeing the letters you write and hearing the sound you make while writing. These sense experiences create contact between different parts of the brain and open the brain up for learning.”

As a result of writing by hand rather than typing on a keyboard, “we both learn better and remember better,” said Van der Meer.

In a related study, Van der Meer also found that the brain was more active even when using a stylus to write and draw on a tablet rather than to type. Based on the evidence, the researchers suggest that even the act of drawing small symbols such as arrows, and other shapes may help us to activate more of our brains.

Now, these studies do not mean that we should never write notes by keyboard. Clearly, a keyboard and screen together offer other benefits – personally, for example, I really like being able to categorise and then find notes later by client and topic. However, if you are looking to maximise your level of brain activation and subsequent memory for content, these studies do suggest that it might at least sometimes be worth writing notes by hand.