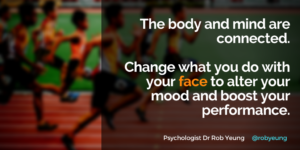 Want to change your mood or boost your performance?

There’s increasing evidence that the body and mind are tightly connected. Of course we all know that our minds can direct our bodies. But the opposite is also true to a degree: what we do with our bodies can affect our minds – how we feel, how we think and how we perform.

I’ve written before on this body-mind connection, specifically how altering your posture can change your mood and mental performance. Here are two other techniques:

Smile to be happier
We start way back in 1988, with a really famous study. A group of scientists asked some participants to hold a pen in their mouths in a very specific way while watching cartoons. The participants were told to hold the pen only with their teeth – and to avoid letting the pen touch their mouths.

Try it if you like. If you look in a mirror, you will notice that you are probably performing something similar to a smile.

Other participants were asked to hold a pen with their mouths as opposed to their teeth. So these people on the whole did not smile.

As I said, that’s a really famous study which was been written about many, many thousands of times all over the world. However, you may be less aware that other scientists have failed to find the same effect.

Thankfully, there is now enough research on the issue to come to a fairly conclusive view on it. A team led by Nicholas Coles at the University of Tennessee recently published an academic paper using a statistical technique called meta-analysis to review the 138 available studies on the topic. And their conclusion was that there is indeed a genuine body-mind effect: simply moving the face can influence emotional experience.

Put on your “game face” to perform well
Staying on the theme of the body-mind connection, a recent paper found that changing your facial expression may help you to cope with stress and perform better, too. Scientists led by Matthew Richesin were interested in the so-called “game face” often adopted by sports people. Think of how tennis players, golfers or gymnasts look just before they are about to compete: they often look serious and determined.

Richesin and his colleagues ran a series of experiments looking at how the serious “game face” would affect people’s performance. For example, in one study, participants were asked to adopt the “game face” before a stressful physical task.

Interestingly though, the scientists failed to find any benefit of “game face” over more neutral expressions. It seemed that facial expression did not benefit people in this situation.

It was only when the researchers asked people to use the “game face” while tackling a cognitive task that they found a benefit – in this case it involved solving a challenging puzzle. Furthermore, the researchers found that adopting a “game face” during the cognitive task was also associated with a lower physiological level of stress (as measured by sympathetic nervous system activation).

In summary then, “game face” may not help people with purely physical tasks. However, it may boost concentration and performance on mental tasks.

The fact that “game face” boosts only mental performance is not incompatible with the fact that many sports people adopt it before or even during competition. Many sports have a mental aspect to them. So even if “game face” does not boost physical strength or performance, it may still help with the mental components of sports and other activities.