How to perform under pressure 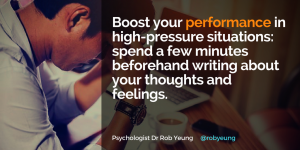 To what extent do you perform at your best under pressure? That may be in a job interview, a written exam or when giving a presentation.

Unfortunately, many people perform worse under pressure. And the more motivated they feel, they worse they may perform.

If you have an anxious desire to perform well, you may begin to worry about the situation and its consequences. If your worries take up even a small portion of your brain’s working memory, you will have fewer mental resources available for performing the task itself.

Expressing your emotions
As a psychologist and career coach, I spend a lot of time helping people to do better in their careers. One technique that I frequently teach clients was written up in the top scientific journal Science by researchers Gerardo Ramirez and Sian Beilock. Professor Sian Beilock at the University of Chicago is a world authority on learning and high-pressure situations. Her research has been deemed of such importance that it is partly funded by the U.S. Department of Education.

Immediately before this second, high-pressure test, the researchers divided the participants into three groups as follows:

Following one of the three experimental interventions, all of the participants then took the second exam. On analysing the results of the experiment, the researchers found that those participants who first sat quietly for 10 minutes actually performed 7 per cent worse in the second test. The added pressure had significantly impaired their test performance.

However, participants who wrote about their thoughts and feelings performed 4 per cent better than they had done initially. It’s not a huge boost, but even the slightest improvement in performance is better than the 7 per cent drop that the “sitting quietly” group experienced.

Importantly, the third group – who had written about an unrelated, neutral event – also experienced a drop in their performance of 7 per cent. The inclusion of this group in the experiment shows that the mere act of writing was not enough to improve test performance.

It is only the act of writing specifically about your thoughts and feelings that is likely to boost your performance.

The research is clear: engaging in expressive writing prior to a high-pressure situation leads to a measurable boost to people’s performance.

The technique may improve test scores by reducing the intrusive thoughts and worries that people experience during the test. So consider writing about your thoughts and feelings for 10 minutes prior to your next big presentation, exam or job interview. Particularly if you are someone who is habitually anxious about such situations, writing about your worries may help to not only alleviate anxiety but also boost your performance.

This article is an updated version of a piece that was first posted on Student Accountant. Click here to read the earlier version.