How to get results and get promoted 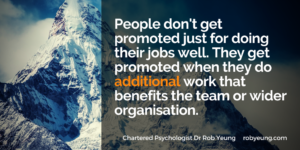 I often hear people saying that they feel frustrated that they haven’t been promoted yet. But people rarely get promoted simply for having worked in a role for a long time. In fact, some people get promoted despite having been in their roles for hardly any time at all.

Here are some observations on how to get promoted.

1. Recognise that doing your job is not enough
You should not expect to get promoted simply for doing your job well. If you are mostly meeting expectations, then this just means that you will get to keep your current job.

2. Come up with ideas that benefit the team or wider organisation
To demonstrate that you are truly deserving of promotion, look for ways to make your team or the wider organisation better. That could include increasing sales or cutting cost. You could help out by finding a faster way to do the same tasks. Perhaps you have an idea that will make things easier for customers or clients – or something that will cut down on admin work between your team and another department.

So, when you have a good idea, make a note of it. Not all of your ideas may ultimately work. But by tracking your ideas, you increase the chances that you will eventually come up with ideas that really are worth pursuing.

3. Build wider support for your ideas
Some people go wrong by coming up with ideas but not having enough other colleagues support them. If you have a really worthwhile idea, it’s worth keeping it to yourself until you have got at least one or two other people on your side.

So, take your idea to a colleague or two who might also stand to gain from making the idea happen. Get their input – they might be able to identify obstacles or barriers that you need to consider in turning your idea into reality.

Don’t try to hold onto ideas as if you own them. When you get others feeling that they also own the idea with you, they will be much more likely to speak up for your idea when you eventually raise it in a group setting.

4. Make a plan
It’s easy to have an idea. But how will you make it happen? What steps will you take?

Again, before you fight for your idea, spend at least a little time sketching out the major steps involved and how you will achieve them. If you intend to ask your line manager for a huge budget, then your project probably won’t happen. Think about how you can get other people to contribute time to the project at as little cost as possible. Do some projections. Get a quote or two if you would need to buy something in.

Put all of this in writing so that you can demonstrate to your manager how achievable your plan should be.

5. Deliver tangible results
Often, people think they deserve to be promoted because they come up with great ideas. But bear in mind that having even exceptional ideas is not enough. If someone else takes your idea and is responsible for turning it into reality, then that other person is the one who gets the credit. You may think it’s unfair, but that’s how things work.

So, if you want to get noticed and be properly deserving of promotion, get involved in projects that turn your ideas into actual results that benefit the team or wider organisation. And remember that you have to deliver these benefits in addition to doing your day job. But if you deliver at least a couple such projects, then you substantially increase the chances of your line manager saying “yes” the next time you ask for a promotion.

How To Stand Out promotion success