Here’s a method of boosting your confidence at work 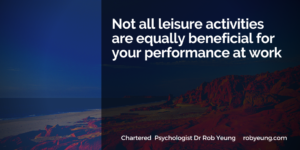 There’s an old English proverb that “All work and no play makes Jack a dull boy”.

For me, I think of the saying as a warning that working long, long hours but not taking the time out for leisure activities can make people feel bored – and perhaps even less able to achieve their goals. And a recent research study suggests that this may indeed be true. However, the researchers found that not all leisure activities were equally beneficial.

A group of British and French researchers tracked the work and leisure activities of 129 adult employees over the course of seven months. They found that certain – but not all – leisure activities boosted the employees’ confidence in their ability to do their jobs or what’s technically called their self-efficacy.

To measure seriousness, the researchers asked the employees to rate the extent of their agreement with statements such as “I regularly train for this activity” and “This activity is very important in describing who I am”. For example, I engage in around five or six hours of physical exercise a week – I lift weights, go running and follow online exercise videos. And I’d agree strongly with both of those statements.

To measure similarity of the leisure activity with the employees’ work, the employees were asked to note the extent of their agreement with statements such as “The mental demands of this activity are similar to my work role” and “The physical demands of this activity are like those of my work role”. For me, I’d disagree strongly with those two statements: exercising is both mentally and physically very different to coaching people and running workshops.

In other words, it seemed helpful to have a serious but very different hobby. It was also beneficial to have a similar leisure pursuit – so long as employees treated it in an unserious, just-for-fun fashion.

The worst effect was for employees who had a serious leisure activity that they rated as similar to their work. When employees reported this pattern, they actually tended to have reduced levels of confidence in their ability to do their jobs.

Perhaps having serious and similar leisure pursuit is simply too draining. How can you invest dozens of hours in your work when you’re also investing many hours in some other activity that puts you under similar mental or physical pressures? So, a professional athlete probably shouldn’t do another physical pursuit. Or a journalist maybe shouldn’t write online fiction for fun.

Of course, it’s not up to me to tell you what you should or shouldn’t be doing. I’m only repeating what the research data tells us. Ultimately, you’re an adult and you’re free to decide to spend your time doing whatever you like.

However, the implication of the study is that leisure pursuits can be a good thing – as long as they meet certain criteria. for the greatest benefit from your leisure pursuits, by all means train hard and invest your energies in an activity if it is considerably different from your paid employment. Or, do something that’s similar to your work so long as you can take it or leave it, not make it too important a part of your identity, and not take it too seriously.

achievement confidence goals How To Stand Out success