Have you set your PINT goals? 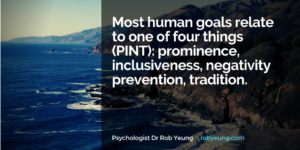 What are your goals in life?

New research suggests that most human goals may fall into four broad categories. Researchers led by Benjamin Wilkowski at the University of Wyoming used what’s known as a lexical approach to investigate the structure of goal-related words in the English language.

The researchers initially identified more than 140,000 English nouns; they then asked hundreds of people to rate the extent to which the nouns were related to human goals. By getting over a thousand people to get involved and using statistical methods known as principal component analyses, the researchers found that most goals could be categorised into one of four categories, which they called the PINT taxonomy.

The four categories are:

Commenting on the team’s results, the lead researcher on the project said: “Our findings suggest that the broadest aspects of human motivation are overwhelmingly social in nature.” Indeed, three of the categories relate specifically to other people (i..e prominence, inclusiveness and tradition); and even negativity prevention could in some cases relate to not losing things that are related to relationships with others.

Putting it another way, many people – at least in industrialized, English-speaking cultures – mostly have goals that are social in nature and reflect their need to belong amongst friends, family, communities and other groups.

What does this mean for you?
To summarise, this new research suggests that most goals fall into one of four categories. So this presents you with an opportunity to think about whether you are putting your energies into pursuing the right sorts of goals for you.

Yes, you almost certainly already have some goals that you feel are important. But are there maybe other ones that you might have been neglecting? For example, are there certain goals relating to tradition that, on reflection, you may actually feel are quite important? Or perhaps you have been vaguely aware that there are some negative outcomes that you should be doing more to avoid – but you have never really given them enough thought.

So the PINT categorisation scheme may allow you a new opportunity to review and reflect on your goals. Are there perhaps other goals that you may need to focus on?