Eat your way to happiness 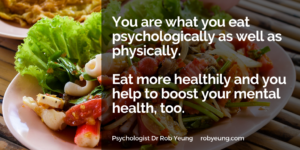 Do you ever feel anxious, moody or depressed? Well, a growing body of evidence suggests that what we eat may have very real effects on our mental health.

A group of scientists recently published the results of a major study in which they monitored the physical and mental health of 15,546 adults over a 10-year period. A team led by Almudena Sanchez-Villegas found that higher levels of added sugars and lower quality of carbohydrates were both associated with a higher risk of depression.

So here we already have several findings in terms of what helped the people in this study to have a better CQI score – and lower risk of depression:
1. Eat more fibre.
2. Eat rather than drink carbohydrates.
3. Eat more whole grains.

However, the study by Sanchez-Villegas and collaborators is not perfect because it’s what’s known as a cohort study. The better test of whether food can affect mental health is to run what’s known as a randomised controlled trial, in which some people are asked to eat healthily while others are allowed to continue eating less healthily.

Improving mental health
Thankfully, a new study led by Heather Francis at Macquarie University did exactly this: these researchers asked willing adults to adopt one of two diets for a period of just three weeks. The 101 adults were asked to complete a battery of psychological tests measuring their mental health before being divided into two groups:

After 21 days, all of the participants again completed the same psychological tests evaluating their mental health. And the results of the study were clear: those who had eaten more healthily for just three weeks had significantly reduced levels of depression. The healthy-eating participants also reported significantly lower levels of anxiety.

In addition, the researchers again evaluated the participants’ mental health three months later. And they again found that those participants who had changed their diet continued to have lower levels of depression.

To me, this is a really important finding. There have for many years been studies showing that unhealthy eating was correlated with poorer mental health. Yet this new study by Francis and her colleagues confirms that a mere 21 days of healthier eating may measurably reduce both depression and anxiety.

Are you ready to take control, change what you eat and improve your mental health, too?