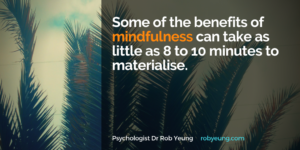 1. Mindfulness benefits everybody
WRONG! There are a small number of documented instances of mindfulness practice having adverse effects for some people.

A team of British, Italian and Spanish researchers led by William Van Gordon at the University of Derby recently pointed out in an academic paper that “both anecdotal and empirical reports of adverse effects have started to gradually materialise”. However, they also went on to conclude that: “Due to the small number of studies that have specifically sought to investigate adverse effects, it remains unclear whether mindfulness can lead to negative health outcomes.”

So mindfulness may not benefit everybody. It is probably correct to say that it benefits many people – but not all.

2. Practising more mindfulness means more benefit
WRONG! In psychology as well as medicine, there is something called the “too-much-of-a-good-thing effect”, which can occur when an excess of a usually positive practice ends up having either less benefit or even negative effects. For example, we know it’s important to drink water and stay hydrated. But sometimes people who drink too much water – for instance when they exercise hard – can experience a harmful condition called hyponatremia.

Similarly, American researcher Willoughby Britton has pointed out that practising mindfulness may have what’s known as a “non-monotonic” (i.e. not linear) relationship with some of its benefits. For example, if you practise mindfulness for 10 hours a month, you may get 10 units of benefit. But if you practise mindfulness for a further 10 hours a month, you may only get an extra 8 or 6 or 3 units of benefit. Obviously, I’ve made those numbers up, but hopefully you get the idea that there may be diminishing returns.

Doing some mindfulness practice is likely beneficial for many people. But doubling (or tripling) the amount of mindfulness you do is unlikely to lead to double (or triple) the benefit.

3. The ultimate goal is to be mindful all of the time
WRONG! Mindfulness is about focusing on what is actually happening to us at any moment in time – so that could be focusing on our internal bodily sensations or perhaps a task we are trying to do. Being mindful means not letting our minds wander.

But it is human for our minds to wander at least some of the time. It would be exhausting – if not impossible – to be mindful 100% of the time. And sometimes, it may even be beneficial to let our minds wander. Creativity is often associated with letting our minds wander. People such as scientists, artists, writers and entrepreneurs have often reported breakthrough ideas coming to them when they were daydreaming.

4. Mindfulness has to be practised while sitting down
WRONG! You can do it standing or even when on the move.

So don’t think of mindfulness that is something that can only occur when you are sat alone at home. Many practitioners of mindfulness suggest that you can try to be more mindful when you’re stood – perhaps waiting for a train or while standing in a queue – or walking around as well.

5. To be beneficial, you have to practise mindfulness for months
WRONG! Some benefits of mindfulness can happen within minutes.

One study found that just 10 minutes of mindfulness practice increased people’s pain thresholds (i.e. they were more able to tolerate pain). Another study found that practising mindfulness was more effective at reducing dysphoric (negative) mood than an equivalent period of time spent doing a distracting activity. In this study, the participants only spent 8 minutes engaging in mindfulness.

So, there are some benefits that can be observed even after just one session of mindfulness. The benefits are measurable but small – and it’s likely that it takes around four to eight weeks of practice for the benefits to really add up.

Anyway, do check out some of the other articles I have written on mindfulness if you would like to learn more about how to practise it.