5 ways to deal with criticism and succeed 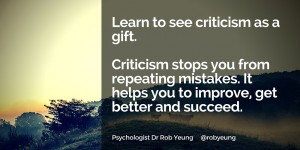 Years ago, I remember working on a client project that I thought was going really well. Then a colleague asked to have a chat with me – when he revealed that a client had given him a list of things that I had got wrong. First of all, it was a big shock. Secondly, I felt really dejected. But after a while, I realised that there were important lessons to learn. And I’ve never made the same mistakes again.

Criticism can help you to succeed. Here are some thoughts on how to deal with criticism and use it to keep improving yourself:

1. See criticism as a gift
When I’m running leadership or employee development workshops, I often tell people that criticism can be a gift. When someone criticises you, it probably doesn’t feel like much of a gift. But criticism really is a gift because it can help you.

I often think that if you want people to fail, the best thing you can do is say nothing and let them keep making the same mistakes. Allow them to live in a cosy bubble of self-delusion where they never get any better.

So the first thing you can do is be thankful that someone has decided to say something to you. Change how you feel about the criticism by telling yourself something like: “Wow, I should be grateful that someone wants to help me by telling me how I can get better at what I do.”

2. Seek clarification
If you really want to learn from criticism, try to talk as little as possible. Any explanations you offer could easily be taken as defensiveness. So make a real effort to listen, listen, listen.

If you don’t understand something, by all means ask a question. But make sure that your question will help you to understand the context and what you may have done wrong. Don’t ask questions to challenge or try to negate what the other person is saying.

Say something like: “I know it’s not easy to criticise someone, but thank you for making the effort to tell me how you feel.”

4. Reflect on the lessons to be learned
Sometimes people may criticise you because they genuinely want you to change how you behave. Occasionally though, people may simply attack you because they feel weak and insecure. In other words, not all criticism is warranted.

Wait until the conversation has ended and then spend a little time trying to work out what you can learn from the criticism. Is there anything that you really should be doing differently from now on? Or, on reflection, are you okay to carry on as you are?

This will require careful judgement on your part to make sure that you learn lessons when there are lessons to be learned – but don’t take things personally when you really are not at fault. If in doubt, tell friends or colleagues about the criticism and seek their advice.

5. Treat yourself with self-compassion
In the aftermath of receiving criticism, it can be easy to blame yourself or beat yourself up. But research shows that’s not terribly helpful. If you want to learn and grow, it is more productive to adopt an attitude of self-compassion.

So tell yourself that you’re only human. Sure, you may have made a mistake. But everyone makes mistakes. Rather than focusing on what you should have done in the past, try to work out what you will do in the future: think about steps you can take to be better from now on.