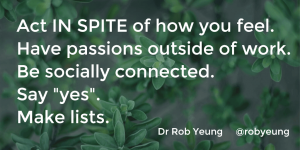 I had a conversation last week with a client, the human resources director of a growing online business, who asked me what distinguishes top performers from the rest of the crowd.  At first, I said that it’s a complex answer and that there are a range of competencies or skills that help high achievers to shine.  But she (playfully) insisted on a top-of-the-head answer.

She said: “I know it’s not very scientific, but if you had to list a half-dozen behaviours that make a difference, what would they be?”

Here are the first 5 habits that came to mind that I think help people to shine:

I realise that my list isn’t very scientific.  It’s just based on my subjective experience of having coached and worked alongside of many exceptional entrepreneurs, managers, doctors and other high performers.  Do let me know what you think should be added to the list!