3 toxic thinking traps that make you anxious and unhappy 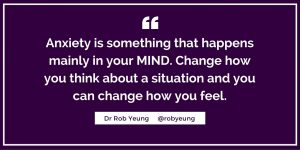 And it’s entirely natural to feel negative emotions at least some of the time. But people often fall into thinking traps that make them even more anxious than they need to be. In my experience, here are three of the most common patterns of thinking that serve only to make you more anxious or unhappy than you need to feel:

1. Catastrophising: Turning molehills into mountains
Catastrophising is a mental tendency to think that problems and issues have far greater consequences than they actually do. People who catastrophise really seriously tend to imagine the worst case scenario.

For example, imagine that someone gives a presentation at work but knows that she has made a couple of mistakes. She may start to catastrophise and worry that everyone will be laughing at her and that her career may as well be over. In reality though, a lot of people probably didn’t even notice – and it certainly isn’t likely to end her career.

Or consider a father who is waiting for his teenage daughter to come home from a party. She’s late and she isn’t answering her phone. So the father starts to catastrophise; he starts to worry that she has been killed in a car accident or that she has been mugged. In reality, the most likely explanation is that she lost track of time and that her phone simply ran out of charge.

If you have a tendency to catastrophise, remember this: your imagination tends to blow things out of proportion. To battle and beat this tendency, try instead to focus on smaller, less terrifying explanations and consequences.

2. All-or-nothing thinking: Thinking that you only ever have two options
A friend of mine I’ll call Harry often says things like:

The restaurant in that first example was since taken over by new owners and completely renovated. I think it’s a fantastic restaurant now. But Harry refuses to go because he tells himself that he will never go there again.

I’ve tried to persuade Harry that James is actually a really fun and pleasant individual. But Harry had a bad experience once (maybe when James was having a particularly bad day). So now Harry refuses to be anywhere near James, even though as a result, it’s Harry who loses out and feels left out of social occasions.

This tendency to use the words “always” and “never” and to see things as either huge successes or massive disasters is indicative of all-or-nothing thinking. People either love you or hate you. It was either your fault or someone else’s fault completely. You’re either going to be a success or a total failure.

But in reality, there are often shades of grey in between. So people don’t either only love you or hate you. Sometimes they can appreciate some of your strengths while disliking certain aspects of you. In an argument, it’s possible that both you and the other person were partly at fault. And it’s possible to make mistakes and to fail along the way but still to improve and eventually be successful: successful people can make mistakes along the way.

If you have a a tendency to engage in all-or-nothing thinking, remind yourself that real life usually involves many shades of grey rather than merely black-or-white, right-or-wrong, success-or-failure scenarios. To beat this tendency, try instead to engage in both-and thinking. Ask yourself: what’s a new way of thinking about this issue that takes into account that answers are often “somewhere in-between”?

Are you telepathic? Can you actually read minds? Of course, the answer is: no. (Or, if the answer is yes, you shouldn’t be wasting your time. You should be out there reading minds and making billions with your unique telepathic talent!)

In the first instance, it could be the case that the woman you were talking to genuinely needed to make a phone call. In the second example, perhaps your boss gave an assignment to someone else because it was fairer.

The point is this: you cannot read minds. So stop jumping to conclusions and assuming the worst motivations behind other people’s decisions.