At the weekend, I bumped into an ex-colleague. We used to work together nearly 20 years ago. Since then, a lot has changed – including me quitting work to set up my own business. For a change then, I thought I would share some of my own personal lessons.

Most of the time I try to recommend techniques that have been proven by science. So do bear in mind that these are just my own personal and possibly idiosyncratic observations.

1. Having more control makes me happier
Some people set up businesses to make more money. But I did it so that I could be more in control of my life and do more of the things that I enjoy.

Around 12 years ago, I was having a conversation with my then-boss. I had already written a few books and was really enjoying writing them. But I was still working full-time for a business consultancy, which didn’t leave me with much time to write books. I tried to negotiate a contract where I could work four days a week. However, one of the partners in the business argued that the one day off a week would be worth so much to me that I should in fact be willing to take a disproportionate pay cut. So he suggested that if I wanted to work 20 per cent less every week, then I should be willing to take a 25 or 30 per cent pay cut!

I decided that I didn’t want to be treated like rubbish. So I quit. Nowadays, I would say to clients I’m coaching that they should have a plan before they quit. But I gave in my 3 months’ notice. And then I used that three months to get an accountant to set up the business from a legal point of view, worked with a web designer to create my first website, and so on.

Within a year, I was working with my own clients. Plus I had landed a lucrative contract with the BBC to present my own TV series. And I was able to devote a lot more time to writing books.

So feeling more in control of my work and being able to pick and choose projects made me a lot, lot happier. Oh, and if you’re interested, here’s the first episode of that BBC TV show (which involved me coaching job hunters who lacked the skills and confidence to find employment) called Who Would Hire You?

2. Playing to my strengths brings me results
One of the benefits of running my own business is that I can to some degree choose not only the major projects but also the smaller tasks that I have to do.

For example, I enjoy giving keynote presentations at massive conferences. I’ve spoken to audiences of literally thousands of people. I love it. And I get good feedback from clients too. So, over time, I have pursued more of that kind of work and been offered more of it too.

I enjoy coaching clients one-on-one too. However, I find that I can only be at my best if I coach a handful of clients a week. Some psychologists work with six, seven or eight clients per day. I know that my concentration would get worse if I did that. So I won’t do it. I typically only coach three or four clients a week.

At the same time, there are lots of things that I don’t do well. So I have an accountant to help me with my finances, accounts and taxes. A web designer looks after my two websites (not only robyeung.com but also my corporate site talentspace.co.uk). I work with a bevy of editors, proof readers, sales and marketing people and other publishing professionals to get my books ready for publication too – I don’t have the skills or attention to detail to do anything other than type my thoughts into a Word document.

The point? It seems that the more I focus on what I enjoy and do well (and try to avoid the things I don’t enjoy or can’t do well), the more productive I become.

Researchers have found that it’s possible for all employees – not just people who run their own businesses – to change the nature of the work. The process is called job crafting and it involves gradually seeking out more projects that you really enjoy. It takes time. But studies have found that people who engage in this process of job crafting – which really only does mean consciously pursuing work that you enjoy – helps people to be not only more satisfied but also more successful at work.

3. Becoming more mindful of the journey (rather than fixated on the destination) helps me both personally and professionally

When I first graduated from university and started my first job for a major American management consultancy, my goal in life was to be successful – and by that I meant to accruing wealth. 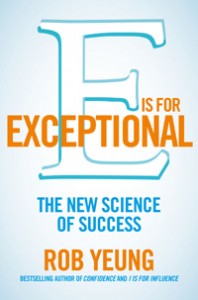 But over the years, I have seen that wealth does not make people much happier. Sure, money allows people to be more comfortable and to go on better holidays. But I have seen entrepreneurs who have accrued literally millions who became no happier. I can think of a couple of business people who were anxious, unhappy people when I first met them; but in spite of earning millions, buying multiple houses and being able to afford all of the material comforts in life, they later were still anxious, unhappy people. (I document a couple of examples of such individuals in Chapter Eight of my E is for Exceptional book).

When people do become happier, it is because they feel more in control of their work. Or they have accrued more power, responsibility and respect. Or they have the satisfaction of mastering new skills. But often it’s not the financial rewards themselves that have made them happier.

Perhaps influenced by such research, I have come to more mindful of what I’m doing, more appreciative of the moments of each day. And I think this has helped me to be not only more content in life, but also more focused and productive in my work too.

Anyway, that’s enough from me. Writing about my own business journey is a bit of an experiment for me. If you’d like more from me along similar lines, then ‘like’ this on Facebook or ‘favourite’ it on Twitter. Or leave me a message saying that you want more.