Why should you be wary about NLP? 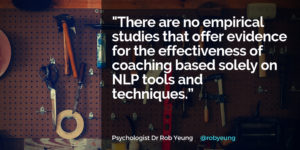 What is NLP?
Neuro-linguistic programming (NLP) is a coaching methodology that was devised in the 1970s by Richard Bandler, John Grinder and Frank Pucelik. However, many evidence-based scientists and psychologists have been intensely critical of NLP, with some even adding it to a list of so-called “discredited treatments”.

After the creation of NLP, its ideas were mainly spread in the form of easy-reading books and training programmes aimed at helping people to achieve change and success. Even the self-help author Tony Robbins originally started out teaching people NLP techniques until a lawsuit in the late 1980s (brought by NLP co-creator Richard Bandler). In an out-of-court settlement, Robbins agreed to pay The Society of NLP $200 for every person that Robbins certified in NLP. Soon after the settlement, Robbins stopped training people in NLP techniques and instead created his own method, which he called Neural Associative Conditioning (NAC).

Why is NLP so controversial?
In psychological therapy, there are many alleged gurus who have created their own therapeutic techniques. Some of these supposed experts have created their own methods with a cynical view – to sell therapies in order to make money. Others of these self-styled experts may think that they genuinely are doing good – even though there is not any scientific evidence to back up their claims.

In 2006, a team of researchers conducted a survey asking 101 mental health professionals to rate the credibility of several dozen supposedly psychological therapies. The researchers were led by John Norcross, who gained a doctorate in clinical psychology from the University of Rhode Island. At the time of the survey, he was a professor of psychology at the University of Scranton in Philadelphia.

Norcross and his team asked the experts (who comprised mainly fellows of the American Psychological Association as well as current and former editors of academic journals in mental health) to rate the various supposed therapies on a scale of 1 (for “not at all discredited”) to 5 (for “certainly discredited”). For example, there is something called angel therapy, which practitioners use to treat mental and behavioural disorders. Angel therapy was rated at 4.98 – as something highly discredited. Past lives therapy for the treatment of mental or behavioural disorders was rated at 4.92.

Essentially, the problem is this: do you believe in the need for scientific evidence – or simply the beliefs of practitioners?

University of Sydney researcher Anthony Grant noted that many researchers “argue that NLP is not evidence-based (i.e. there is little peer-reviewed evidence to show that NLP actually works. The other side might then respond that practitioners know that it works because they have personally witnessed significant change in NLP clients.”

Presumably even practitioners who use angel therapy and past lives therapy believe that they have personally witnessed significant change through their methods. However, some might argue that mere belief without evidence might actually better be seen as delusion.

How much training do NLP practitioners have?
Many of the commercially available programmes say that they can certify people as Master Practitioners in NLP in around 12 to 15 days. However, consider that most counselling or clinical psychologists in the UK and US take between three to five years to gain their qualifications and certifications.

What is the modern psychological view of NLP?
Researchers and qualified psychologists are mostly damning about NLP. In a 2019 paper published in International Coaching Psychology Review, a group of experts wrote that: “there are many critics of NLP who view NLP as variably a pseudoscience, pop psychology or even a cult, with no evidence base for its effectiveness.”

Based on their own investigations of 90 articles that they found on the topic of NLP, they concluded: “In summary, there are no empirical studies that offer evidence for the effectiveness of coaching based solely on NLP tools and techniques.”

That’s important. They did not find that there were only a few scientific studies supporting NLP. They found no papers – zero, zilch, not one.

As just one example, consider a series of investigations led by Richard Wiseman, a professor of psychology at the University of Hertfordshire. NLP contends that people’s eye movements can be indicative of their mental state or even when they are lying. However, the data gathered by Wiseman and his colleagues led them to conclude: “the results of the three studies fail to support the claims of NLP.”

In another recent academic paper, Henley Business School researchers Jonathan Passmore and Tatiana Rowson reviewed the science of NLP and concluded: “we have no hesitation in coming to the view that coaching psychologists and those interested in evidenced based coaching would be wise to ignore the NLP brand in favour of models, approaches and techniques where a clear evidence base exists.”

A separate review by Tomasz Witkowski used stronger language, criticising NLP as “full of borrowings from science or expressions referring to it, devoid of any scientific meaning. It is seen already in the very name – neuro-linguistic programming – which is a cruel deception. At the neuronal level it provides no explanation and it has nothing in common with academic linguistics or programming.” At the conclusion of his paper, he concluded that: “NLP represents pseudoscientific rubbish, which should be mothballed forever.”

If not NLP, then what else?
The British National Health Service (NHS) states that self-help books, apps and courses may be useful when grounded in cognitive behavioural therapy (CBT). For example, the NHS website usefully recommends some apps and online tools that can be accessed for free. In terms of books, the NHS website suggests: “Check whether a book was written by a counsellor or therapist who has lots of experience and is registered with a professional body, such as the British Psychological Society.”

17 Responses to “Why should you be wary about NLP?”