Why is job hunting so difficult? 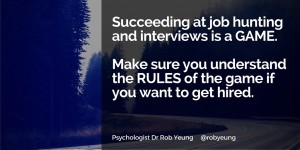 I spend a fair amount of my time coaching job hunters on how to present themselves more effectively in order to get the jobs they want. Progressive employers want to hire the very best people for the vacancies they have to fill. Unfortunately, many employers are not progressive – too many employers do discriminate unfairly against candidates from what those employers see as unsuitable backgrounds.

Here are some recent research findings along with some practical advice:

But a study led by researcher Nicolas Guéguen suggests that people with names that sound more attractive also tend to get better employment outcomes. Perhaps it’s not a surprise that many superheroes have names that roll off the tongue easily, e.g. Peter Parker (Spider-Man), Clark Kent (Superman). So it might be worth thinking about what name you use both in written applications and in person.

If you have an unusual first name, it might be worth using a more attractive nick name or a middle name, perhaps.

Employers tend not to view redundancy well. Technically speaking, redundancy is something that happens when an organisation needs to cut costs. Being made redundant should not be taken as an indication of the skills and abilities of the person who was made redundant. Unfortunately, not all employers think like that. A 2015 study found that some employers see redundancy as a sign of weakness in applicants.

It’s worth keeping information about your past career circumstances to yourself unless you are specifically asked about it.

Employers even discriminate against cancer survivors. Rather shockingly, a recent study found that employers were far less likely to hire applicants who mentioned that they had survived cancer. Undercover researchers posing as applicants either disclosed or did not disclose that they had had cancer. 37 per cent of those not mentioning cancer were invited to interview; only 21 per cent of those who said they had recovered from cancer were invited back.

Remember that there is no legal requirement for you to mention cancer or any other diseases you may ever have had. While you may be proud of your battle and survival, just remember that not everyone (especially employers) may think the same way.

Employers don’t like overweight people. Researchers have known for quite a few years that women who are overweight tend to be penalized for being heavier. But a new study also found that overweight is an issue for men too. Researchers at Rice University asked non-overweight men to apply face-to-face for jobs in retail stores. The researchers later asked the same men to apply for the same jobs in other shops, but this time wearing prosthetics (i.e. ‘fat suits’). When wearing the overweight prosthetics, the men were subjected to significantly more negative body language – for example far more frowning than smiling.

Clearly, your weight is not always something that you can do something about – especially if you have a medical condition. But if you want to enhance your long-term job prospects, it may be worth thinking about your weight.

Taking all of this together, the sad conclusion that we can reach is that life is not always fair. Employers should behave fairly and treat everybody equally but the reality is that they don’t. If you want to progress in your career, remember that job hunting and succeeding at interviews is essentially a game. And to play well, you need to understand the rules.