Why and how does cynicism hurt us? 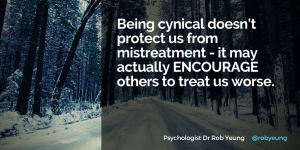 How cynical are you? Let’s try to estimate your level of cynicism by considering the extent to which you agree with three statements:

The more you agree with those statements, the higher your level of cynicism. Psychologists define cynicism as a tendency to expect that others will engage in exploitation, deception and other treacherous behaviours in order to maximise their self-interest. Individuals who score high on cynicism believe that it’s a good idea to be wary of other people.

Unfortunately, cynical tendencies tend to be linked to various negative outcomes. For example, one research investigation found that cynical people tend to experience poorer physical and psychological health. Another study has shown that people who have more cynical views also tend to have more difficult relationships with their line managers.

Often, people who are more cynical say that they are only cynical because they have experienced more disrespect or mistreatment at the hands of others. Indeed, a research study of over 53,000 people in 29 countries found that cynicism and the experience of disrespect were linked.

But is it really that simple that people become cynical because they were victimised – that they were first treated badly by others?

A new series of studies led by Olga Stavrova of Tilburg University in the Netherlands suggests that the relationship between cynicism and mistreatment is more complicated. By following people over time, the researchers observed that experiences of disrespect did indeed promote a more cynical view of the world. That confirms the theory that being the victim of mistreatment by others leads to cynicism.

However, the researchers also found that the more cynical individuals became, the more they were likely to behave negatively towards other people. Stravrova and her colleagues suggest that cynicism for some people might be a kind of defensive strategy: being cold or otherwise negative towards others could be a pre-emptive strike. After all, if you expect that others will treat you badly, why not treat them badly first?

Unfortunately, this strategy is not only ineffective – it is likely to backfire.

Suppose that two people called Jack and Samara are going on a first date – a dinner at a local restaurant. Jack is somewhat cynical and is rather wary of Samara. He wonders if she might be going on the date just to get a free meal out of him. So he makes a few negative comments about the fact that he will end up paying for dinner. In turn, that makes Samara feel rather negative about Jack. And after the date, she doesn’t call him – which only reinforces in Jack’s mind that he was right to be cynical about her.

But imagine now if Jack had gone on the date with a less cynical, warmer view of how the date would go. Rather than seeing Samara as someone out to get a free meal, he thinks of her as someone who may be nervous but open to the possibility of a genuine relationship. This different belief makes him smile more during the date and to be more positive in general. In turn, that makes Samara feel more positive about Jack and more likely to call him back to organise a second date.

Or consider an employee called Liza. If Liza has a cynical view of managers in general, she may behave somewhat cautiously or even coldly whenever she has meetings with her line manager. That makes her line manager feel that Liza isn’t committed to her job, so the line manager doesn’t promote her. And of course that confirms for Liza that she was right to be cynical about management in the first place.

Clearly, those are hypothetical situations. However, the data collected across six studies by Stavrova and her colleagues suggests that cynicism is both a result and cause of disrespect. People who hold cynical views are both victims (on the receiving end of mistreatment by others) and perpetrators (in terms of acting negatively towards others). Being mistreated may cause people to become more cynical; but being cynical may cause those same people to act more negatively towards others, too. And that just propagates a vicious cycle of increasing cynicism and ever greater levels of disrespect towards others and being mistreated in turn.

Yes, a certain level of wariness and caution may in some instances protect you from being taken advantage of. But, if you hold overly cynical beliefs about the people that you meet and interact with, don’t be too surprised if you end up alienating colleagues as well as friends and family.