What’s the best way to debrief after something goes wrong? 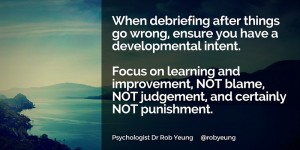 Things don’t always go well in life. Your team may have been planning something for months – say a conference, a client pitch or any kind of major project – but it ends up going wrong. Of course things can go wrong away from the office too. A medical procedure accidentally endangers a patient’s life. A manoeuvre by the armed forces ends up in defeat. A mistake on an oil rig leads to environmental devastation.

What can you do in the aftermath?

Well, here’s what not to do: have people blame each other and get defensive. That way, no one learns.  Another thing not to do: be arrogant enough to think it’ll never happen again.

In fact, the researchers also established that debriefs were effective for individuals too. You don’t have to be working in a team to conduct a debrief to figure out the lessons – you can do a debrief for yourself too.

When it comes to doing a solo debrief, I would add the following advice:

Things don’t always go smoothly.  But rather than simply moving on, smart people look back to figure out what they could do better next time.  That way, you help make better decisions in the future.  So here’s the question: are you a smart person who will run debriefs – or one of those not-so-smart people who thinks they know better?

What is THE best way to learn from mistakes? Run an ‘after-action review’ http://t.co/9xEZ4MAHaN