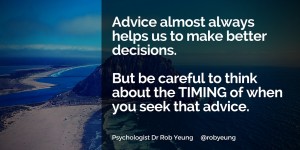 People are notoriously bad at taking advice. I’m sure you can think of plenty of people who ignore advice that they should eat more healthily, exercise more, stop smoking, find a new job, end a bad relationship, etc. Life would be so much easier if only everyone else would listen to good advice!

But let’s be honest here. There are almost certainly times when you probably don’t listen to good advice too.

Thankfully, a study in the journal Organizational Behavior and Human Decision Processes shows how all of us – you, me and everyone else around us – can end up making better decisions.

Researchers Christina Rader, Jack Soll and Richard Larrick of the Fuqua School of Business at Duke University invited 605 people to participate in an online study. Each participant was shown the photo of an individual and asked to guess the age of that person. Simple, right?

Without their knowledge though, the participants were split into two groups:

So what do you think?  Which do you think would lead to more accurate decisions?  Have a go and think it through.

The researchers found that participants in the group who reached their preliminary conclusions first, heard advice and then revised their opinions reported feeling more confident about their decisions than those who heard advice before estimating. But of course, feeling more confident isn’t much use if they were wrong. So it was just as well that the researchers also found that the participants who made an initial estimate before hearing advice were also more accurate.

Based on their finding, the researchers recommend that people facing a decision would benefit from thinking through an issue before seeking advice. So the next time you have to embark on a project, have a go at working out what you think about it first.

It’s better to come up with an initial opinion before seeking advice rather than hearing what someone else has to say and then being unduly influenced by it.

Think about the applications in your own life and work.  If you’re trying to plan a project at work, it may be tempting to go to the most experienced project managers and seek their advice right away.  But this study suggests that you should come up with a draft plan first.

Or suppose you want to buy a house, organise a party, change career or just about anything else. Right or wrong, it may be a better idea to have a rough idea of how you might do it before you go asking anyone else’s opinions.

Good luck out there!