Staying well and productive under the coronavirus 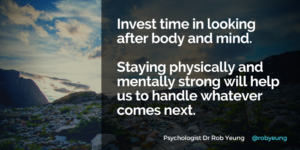 The UK – like many other countries around the world – is currently in lockdown. As a psychologist, I’m used to working mainly face-to-face with people – coaching people one-on-one, running workshops for a dozen or so people, or giving conference presentations to hundreds of people at a time. Clearly, none of that is possible.

Here are some personal methods that I have found useful for staying productive and managing my mental well-being. Remember that I am not saying that any of this will be right for everybody; I just thought I am simply sharing my personal journey.

Stick to a sleep routine
Research tells us that sleeping well is a major component of mental well-being and productivity; and studies suggest that having a regular sleep schedule helps us to both fall asleep faster and sleep more deeply. So even though I no longer need to get up at a certain time every morning, we in our household have decided to get up at 7am anyway. And we stick to a regular bedtime of around 11pm.

Introduce a daytime routine
The day in our household starts with an hour-long family walk with the dog. Some of the walkways and paths are busier than others, so we mostly keep to side streets (as some runners are unfortunately not observing good social distancing rules and are sometimes running perilously close to us). Our phones show that we are walking around 7,500 steps – which is probably just over 3 miles.

After breakfast at home, I usually settle at my computer to do a couple of hours of work. Then I have a standing reservation in the household to use the ‘fitness studio’ (aka the lounge) at midday. On Mondays, Wednesdays and Fridays, I do 30-minute cardio workouts by following instructors on YouTube. On the other days of the week, I do body weight exercises (e.g. press ups and squats) and lift weights with some dumbbells (e.g. bent over rows).

After lunch, I settle at my computer for an afternoon of work until around 5 or 7pm – although I will happily interrupt my work to have a video call with friends or family.

Get used to video calls
I’m still providing one-to-one coaching online, recording training videos for clients and even running the occasional virtual workshop. During video conferences, I’ve found that a couple of pointers help the flow of conversation:

A client recorded a video of me speaking the other day; we started out using Skype but he said there was a problem with the synchronisation of the audio and visual. We switched to Zoom and he said that it looked and sounded better. However, for one-to-one video calls, I personally prefer the interface on Skype.

Stay socially connected…
Like many people, I’m trying to reach out to more friends and family as well as vulnerable people nearby. I spend a few minutes each day thinking about who I haven’t contacted in a while. I then either send a quick online message, a longer email or perhaps suggest a telephone or video call.

I’m trying to be more aware of older family members who have self-isolated and are not leaving their homes. I’m particularly concerned for those who live alone and may not have anyone to talk to all day. So it’s the least I can do to message them or call them a little more frequently.

Socially, I am mostly using Facebook Messenger for video calls. The video quality is not anywhere near as good as Zoom or Skype, but it is perfectly adequate for calls with friends and family.

… But be careful of social media
It concerns me when friends and family suggest that I should gargle every 15 minutes with salt water or I read on social media that drinking diluted bleach can kill the coronavirus. Unfortunately, there are many well-meaning but misinformed people around – and social media is full of misleading or completely wrong information.

I spend a few minutes every morning checking the latest news reports from only a small number of high-quality media sources:

I spend maybe 10 minutes reading the news directly on those sites (rather than via social media). The only way I can trust reports is to know that it has been written by a journalist with good credentials.

Eat more carefully
When I was rushing around from one client to another, I often literally had to buy a sandwich and eat it while walking or travelling on the London Underground. Now that I am at home (and probably getting less exercise), I have the opportunity to be more considered with my eating.

For instance, I have started having a handful of almonds as my mid-afternoon snack. I looked at the research into almonds and there are many benefits. One study conducted in 2014 asked two groups of participants to follow balanced diets. The only difference was that the experimental group was given an extra 50g of almonds to eat per day (in addition to their balanced diet).

Over three months, the experimental almond-eating group had reduced levels of low-density lipoprotein cholesterol (i.e. the so-called bad cholesterol) and lower blood pressure. Perhaps more astonishingly though, the participants who ate the additional almonds actually lost significantly more weight than those who did not.

Now, there will be some people who wonder how it’s possible to eat nuts but lose weight. Surely the extra calories from almonds should make people more likely to gain weight?

The answer lies in a concept known as bioavailability or bioaccessibility. The human body is not able to absorb all of the calories from certain foods because fibre, cell walls and other components in foods can slow or otherwise affect the digestion process.

In a 2018 issue of Nutrition Reviews, researchers led by Edoardo Capuano noted that: “100g of cookies contains 13% fewer calories than 100g of almonds. The higher caloric value of almonds is attributable to the higher lipid content of almonds. Such a difference in calories may prompt consumers to choose the cookies rather than the almonds. However, several published studies show that the bioaccessibility of lipid in almonds is drastically reduced by the almond cell walls that hinder the release of intracellular lipid” – which means that the human body absorbs fewer calories from almonds than they actually contain.

A major finding from this sort of research concludes that there is more to food than mere calories because of the composition of food – its food matrix. If you’re interested in this kind of ‘beyond calorie’ thinking, you could do worse than to read a recent research paper by KL Stanhope, a leading molecular bioscience researcher at the University of California, Davis.

Anyway, my wider point is that I am being a lot more mindful about what I am feeding my body. I would like to come out of this coronavirus period being in good shape both physically and mentally.

Oh, and I’ve written in the past on the relationship between eating and mental health if you’re interested in that.

Final thoughts
This has very much been a record of some of the things I am doing personally. Do let me know what you are doing in order to maintain your physical health, mental well-being and work productivity.