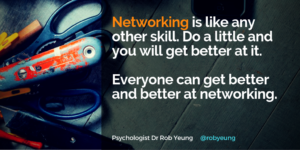 You know that networking matters. You don’t need me to tell you that again.

I have previously written networking tips for introverts on this site. However, a new journalist recently asked me some different questions about networking, so I thought I would post my answers to her questions in full:

‘Why do so many people hate networking?’
Introverts in particular find it emotionally draining when they have to engage with lots of unfamiliar people. Introverts typically prefer to spend their time with people they know well rather than strangers. As such, introverts are often at a disadvantage compared to extraverts because they simply spend less time with new people.

In my experience though, everybody can get better at networking. It just takes a little effort on your part and the willingness to set aside perhaps one lunchtime or evening a week to doing something to build your network.

‘Why is networking so importantly exactly?’
I think most of us would love to believe that promotions and other career opportunities are handed out on a completely objective, transparent and fair basis. However, the reality is that the managers who make such decisions are only human.

Think about it this way. If you needed a plumber to fix a leak and you happened to have a friend who was also a good plumber, wouldn’t you give the job to your friend? Exactly the same thing happens in the workplace.

When making decisions about who to promote, managers usually try to take into account factors such as people’s skills, experience and achievements. But they are only human, too: of course they tend to favour people that they know, like and trust.

So networking is just about making sure that managers and other decision makers also know, like and trust you.

‘It can feel like working life is rigged against introverts when it comes to advancing in the workplace: you have to network and be noticed to get a raise or promotion when maybe you’d rather just keep your head down and quietly do a good job. What’s your advice for introverts who feel this way?’
It’s really worth remembering that simply doing a good job is not enough to get ahead. If you want only to do your job well, you need to accept that you will be towards the back of the queue when it comes to getting pay rises or promotions.

‘What are your best tips for introverts who want to get better at networking?’
Firstly, understand that the biggest barrier to networking is often psychological. Some people think of networking as a process of being insincere and pretending to get along with people that you secretly hate. But, especially for introverts, it’s worth thinking of networking merely as a process of making friends out of people you don’t yet know well. So networking is about chatting to people, learning more about their work and life outside of work, and finding common ground.

One of the best things you can do to network more within your organisation is simply to go for more lunches or after-work drinks with colleagues – especially the ones you know less well. So rather than hanging out mostly with the people that you consider your good friends, make an effort occasionally to get to know other people more. Just being on friendly terms with people is a great start to building your network.

When people like you a little more, they will be a little more likely to think of you for projects and other opportunities.

I also recommend arranging a get-together occasionally with old friends and people you used to work with. Perhaps once a week or just a couple of times a month, go through your address book or email list and see if an ex-colleague, ex-client or anyone else would like to meet up for a quick breakfast, lunch, drink or whatever. Again, you don’t have to do anything manipulative or sinister. Just take the time to be sociable.

When you remind people that you exist, they will be more likely to recommend you or come to you with opportunities.

‘Is it possible to train yourself to love networking – or is it just something that you need to grit your teeth and get on with?’
With practice, some people do indeed find that they come to enjoy networking. But even if you don’t enjoy it, you can at least do it more effectively and less painfully.

Networking is like any skill – like playing the piano or speaking a new language. Some people have more natural talent or inclination for it; but pretty much everyone can get better at it by putting some effort into it.

If you want even more advice on networking, then do check out my earlier advice on the topic.