How to make yourself happier 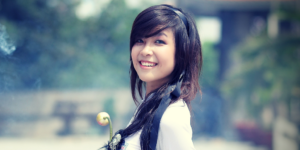 A new research paper points to a small tip that may help you to be just a little bit happier.

In psychology, there are many chicken and egg questions in determining which came first. For example, do people smile because they are happy? Or do people become happy because they smile?

Alternatively, we can phrase those questions differently in terms of cause and effect. Does happiness cause people to smile more? Or does smiling cause people to be happier?

In psychology, there is something called the facial feedback hypothesis, which argues that a person’s emotions (e.g. happiness) are influenced by their facial movements (e.g. smiling). For instance, try holding a pen or pencil between your teeth but without letting the pen or pencil touch your lips. If you look in a mirror, you will see that you are performing a facial movement that is somewhat like a smile.

In one famous study, experimental participants who were instructed to hold a pencil without letting it touch their lips ended up feeling measurably happier than other people who were instructed to assume different facial expressions. The researchers took this as evidence that the mere act of smiling can cause people to feel at least somewhat happier.

So the facial feedback hypothesis says that if you force yourself to smile, you should feel a bit happier. But the hypothesis has also been dogged by other studies that have not replicated this positive effect.

However, a new research paper seems to suggest that the facial feedback effect is indeed real. A team of researchers led by Nicholas Coles at the University of Tennessee, Knoxville conducted a review of the science on the facial feedback hypothesis. Using a statistical method known as a meta-analysis, the researchers evaluated data from 138 earlier studies and found that there was indeed a small but measurable facial feedback effect. In other words, forcing yourself to smile may indeed help to make you feel happier.

In an interview, Coles cautioned that “We don’t think that people can smile their way to happiness.” So their research paper is not saying that simply forcing yourself to smile will make you happy. However, their meta-analysis did find that different facial expressions can strengthen the emotions that you feel. For instance, smiling may make you feel happier, frowning may make you feel sadder, and scowling may make you feel angrier.

So be more aware of what your face is doing. Your face is not merely a reflection of how you feel.