How to have a happier relationship 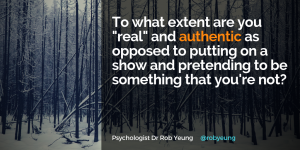 I’m going to tell you how you can have a happier relationship. But first, let me ask you a few questions. To what extent do the following statements describe you?

And what about these other statements?

The statements are derived from a psychometric questionnaire originally created by researchers Michael Kernis and Brian Goldman. All ten statements measure what is known as authenticity, which is the extent to which you are “real” as opposed to putting on a show and pretending to be something that you’re not. Authenticity is a continuum, a spectrium. So you’re not either “authentic” or “inauthentic”. You are more authentic if you agree more strongly with the first five statements. You are also more authentic if you disagree more strongly with the second set of five statements.

People who are more authentic tend to spend more time thinking about what they truly need and want in life. They are also more open in talking about their needs, beliefs, strengths and weaknesses. People higher on authenticity are more likely to speak up or to say “no” even when it might disappoint other people or perhaps cause offence.

If you would like to have a healthier relationship and feel happier, think about your own behaviour. How could you behave more authentically?

For example, the very first statements says: “I want close friends and family members to understand my weaknesses and flaws.” So to what extent do you talk about your worries, problems and mistakes with your partner? What stops you from sharing more? And how could you behave more authentically from now on?

Being more authentic tends to be associated with more honesty and openness. However, being honest does not mean being rude about what you want or what you don’t like. Instead, it means sharing your concerns and desires more frequently as opposed to having to pretend to be something that you are not.

This isn’t a quick exercise that you can do in just a few minutes. But if you are serious about improving the quality of your relationship – as well as your own well-being – then do give the matter more thought soon.