How to feel less angry 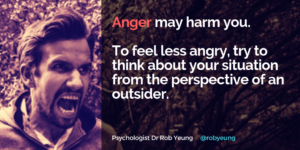 What makes you angry? Perhaps it’s rude or disorganised behaviour by your colleagues at work. Maybe you get angry about bad drivers or friends and family members who repeatedly let you down.

Anger can sometimes be a useful emotion. It can motivate us to speak up or act about injustices and wrongdoing. However, talking and behaving in a very angry fashion can be harmful to us – one study led by researcher Meaghan Barlow showed that anger was associated with more bodily inflammation and illness than the emotion of sadness, for example.

What NOT to do when you’re feeling angry
There are some people who recommend venting the emotion when you feel angry. For example, some people like to punch cushions while thinking about the person who angered them; others prefer to find a place where they won’t be observed in which they can shout and scream. The idea is that it’s carthartic to release or get anger out.

However, research conducted by Iowa State University investigator Brad Bushman disputes that theory. In a now-famous experiment, Bushman found that people who vented their anger by hitting a punching bag actually felt more angry and went on to behave more aggressively, too.

What to do when you’re feeling angry
Further studies have shown that people sometimes continue to feel angry because they engage in a mental process called rumination – or thinking repeatedly about the person or incident that caused the emotion in the first place.

Sometimes, this may happen without you wanting for it to happen. You may find yourself dwelling on the situation. Or perhaps you want to think back to the incident in order to learn from it so you can avoid it or deal with it more effectively in the future. Thankfully, research tells us how to dampen down anger.

In one study, researchers led by Rebecca Ray at Stanford University invited participants to relive an angry experience in one of two ways.

Some of the participants were asked to “think about [the event] from your own perspective, and turn it over and over in your mind. Focus on those things that initially made you feel and respond the way that you did.” In other words, they were asked to relive the experience.

Other participants were asked to think about the event from a different perspective – “you might try to see this event from the perspective of an impartial observer.”

When the researchers asked the participants how angry they felt, they spotted a clear difference. Participants in the second group who had been invited to see the event “from the perspective of an impartial observer” felt significantly less angry. And this way of thinking is called reappraisal – choosing deliberately to appraise or think about a situation from a different perspective.

So if you want to control your emotions more effectively, try reappraising situations. If someone has angered you, try to look back on the incident in a different way.

Don’t just think of you as having been right and the other person as completely wrong. Imagine what a completely neutral third-party might say about what happened. Do this and the science says that you should help yourself to feel less angry more quickly.