Do you wish you could feel more confident? 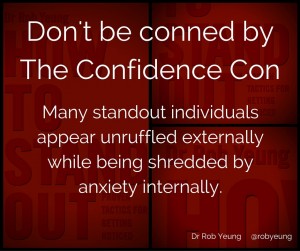 Do you ever feel that just about everyone else must be more confident than you?

A research study by Alexander Jordan at Tuck School of Business found that most of us tend to think that other people are 20 per cent happier and more confident than they actually are.  That’s because of something that I call The Confidence Con: the fact that we are conned by the surface appearance of confidence.  So when we see someone who appears confident, we assume that he or she also feels confident inside.  But the study by Alexander Jordan (as well as studies by  other researchers too) tells us that’s often not true.

In fact, many individuals who appear confident on the outside are actually wracked by self-doubt and a lack of confidence on the inside.  There are many examples of famous people who all appear confident on the surface yet report feeling incredibly nervous: people like the singer Adele and actors Sir Derek Jacobi and Dame Judi Dench.  I have also worked with many executives, entrepreneurs, doctors, lawyers and entertainers who seemed confident yet who confessed to feeling huge levels of anxiety and a lack of confidence.  For the confidence chapter of my book How To Stand Out: Proven Tactics For Getting Noticed, I interviewed a sales woman who was described by her colleagues as a “power woman” and someone “really ambitious, confident, on it, quite matter of fact, very business oriented, just like a bulldozer.”  Yet privately, she admitted to feeling great anxiety; she had even experienced panic attacks in the past without her colleagues knowing.

So trust me when I say the following to you:

There are probably many people around you who feel less confident than they may seem on the surface.

Okay.  Perhaps you’re wondering: how does this help you if you’re struggling with your confidence?

So here are three points to take away:

Are you in danger of falling prey to The Confidence Con? My advice: http://t.co/TpzI2hnzst pic.twitter.com/MkbzJj7XPM

confidence How To Stand Out