Do you have enough real friends at work?

In a recent edition of the Financial Times, a columnist asked several experts (including me) for our thoughts on friendships in the workplace. You can read it on the FT’s website; however, as the FT’s site requires registration (which is free), I have also copied and pasted the article for you to read too.

The careerist: Friendship in the workplace

Friends make working life far more pleasant and can improve your prospects. But they might also cause conflicts of interest.

What do friends bring to the workplace?

“It helps to have a small group of people you can trust, be open with and share ideas with,” says Ekow Eshun, a partner at cultural consultancy Bug, which recently produced a report with whisky brand Chivas Regal called The Evolution of Friendship.

Psychologist Rob Yeung, a director of leadership consultancy Talentspace, adds:
“When you’re frustrated or things have gone wrong, it’s good to vent to someone who is a confidante.”

Jessica Pryce-Jones, chief executive of consultancy iOpener and author of Happiness at Work, says: “Friends can help you be more productive because people tend to achieve more when they feel supported.”

What should I consider?

“You can’t be cynical and just use friends to advance your career,” says Mr Eshun.

“It’s easy to get caught up in the idea that work friendship is about being friends with the right people. But genuine friendship is more important.”

Mr Yeung notes: “If you’re friends with people the career benefits tend to flow naturally. Teams and companies with high levels of friendship tend to be more cohesive.”

Should you wish to make a new friendship, Ms Pryce-Jones suggests you “offer to do something small for them. It means you’re investing in them and they should do something back.”

Must they be colleagues?

“Our research showed that men often went to old school friends when trying to figure out strategies and dilemmas,” says Mr Eshun. “They were often on parallel career paths.”

Ms Pryce-Jones highlights online sources of support. “Before the internet and phones, you had to have a close friend at work. Now you can find some of that virtually.”

Mr Eshun cautions, however, that quality is more important than quantity. “Use networks smartly,” he says. “A popular philosophy around networking says you should have as broad a network as possible. I’d disagree. Look to a smaller network but think about how you can mine information from it.”

What are the downsides?

Workplace friendships that can cause problems include the appearance of favouritism, having to make decisions that upset friends and even betrayal.

On the latter, Ms Pryce-Jones explains: “If the friend says ‘I screwed up and I didn’t want this to happen’, that is one thing. But if it was intentional or malicious, then it’s an immediate trust-breaker.”

If this happens, she advises against arguing in the office. “It’s often better to play the long game as the chances are that if they’ve shafted you they’ll do it to someone else and more seriously,” she says.

At the same time, find a way to let others know what happened. “You don’t want to be seen as a pushover”. 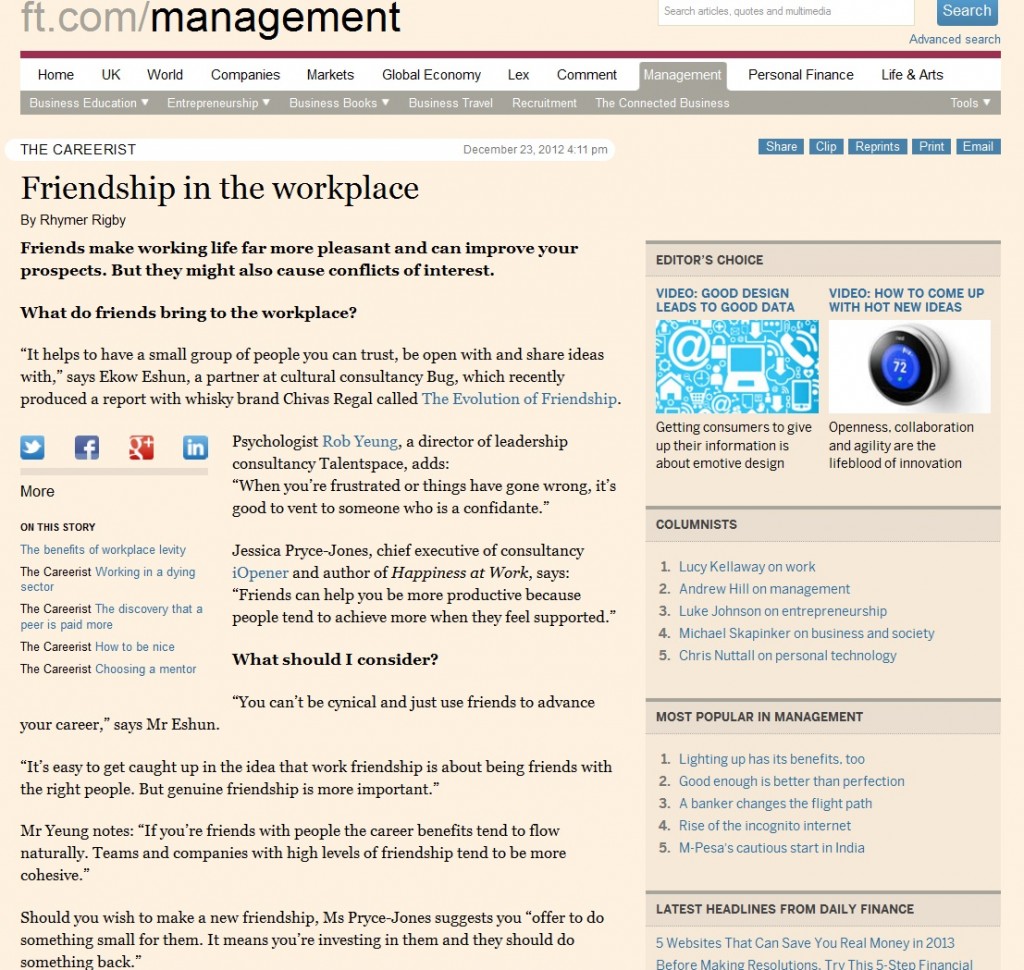