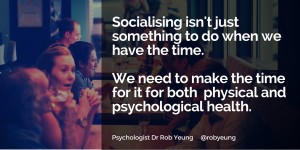 Like many people, I find it difficult to sit and work at a computer without wanting to get up and go for a chat. Sometimes, going to get a coffee is as much about wanting to bump into someone for conversation as it is about the coffee itself.

I always used to feel guilty that I wasn’t sat at my desk doing more work, but there’s a growing body of evidence to suggest that social interaction isn’t just something that is pleasant – it may actually boost our performance and be essential for our health too.

The effects of socialising on mental performance

In a paper published in Personality and Social Psychology Bulletin, University of Michigan researcher Oscar Ybarra led a team to run several studies looking at the cognitive benefits of social interaction. Notably, the studies were run jointly with Joel Rogriguez, who represented the U.S. Federal Bureau of Investigation (yes, the FBI).

In the first study, Ybarra and his team interviewed several thousand individuals. Part of the interview was to collect data on the nature of their social interactions; however, another part was to conduct a standardized mini-mental exam.

Analysing the data, a pattern was clear: the more socially engaged people were, the higher their mental performance. Importantly, this was true for people of all ages. So even younger people who socialised more tended to be mentally sharper than people of the same age who socialised less.

But stronger evidence comes from a second study. In this experiment, Ybarra and his team asked people to engage in one of three activities:

Immediately after one of the three activities, all of the participants were asked to complete two tests of mental performance to measure memory and speed of processing. The researchers found that both social interaction and intellectual stimulation were equally beneficial in terms of boosting people’s cognitive abilities.

Now, we would expect that intellectual tasks would sharpen our memory and processing speed. But the research is notable as it shows that merely engaging in a discussion with one other person can boost not only memory but also processing speed.

Remember I mentioned that the study was co-authored by someone from the FBI? It makes sense that the FBI would want to know methods that can help their agents to operate at the peak of their intellectual capacity. So think about it this way: if it’s good enough for the FBI, it should be good enough for you too.

Engage in periodic social interaction if you want to perform at your mental best.

The effects of socialising on physical health

Sheldon Cohen at Carnegie Mellon University has conducted dozens of experiments looking at how social networks may protect our physical health. A typical experiment involves bringing people into his laboratory and then deliberately exposing them to the common cold virus.

In study after study, he has found the same result: people who socialise more tend to be less likely to catch the common cold. In fact, in one paper, Cohen and colleagues even found that people with more types of social ties produced less mucus when they got ill too.

To summarise, don’t think of socialising as something that you can do when you have the time for it. Humans are a social species. Our bodies and minds evolved in social settings. Depriving ourselves of social contact may be bad for both body and mind.

Get out there and socialise. It will boost your cognitive performance and keep you healthier.