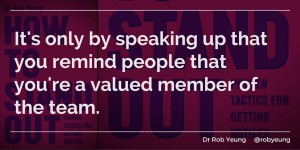 When I’m coaching clients who wish they could speak up more, they sometimes say things like:

The thing is: there are often times when you need to speak up.  Yes, there may be a voice at the back of your head telling you to stay quiet.  But here are five good reasons why I think you should speak up:

So there we have five reasons to speak up.  But if you need even more of a confidence boost, consider these final two tips for getting more fired up.  Firstly, remember The Confidence Con and the fact that lots of other people probably feel less confident than they appear.  Secondly, put a label on how you feel – describe how you’re feeling – it’s a proven way of reducing anxiety and nervousness.

confidence How To Stand Out top tips