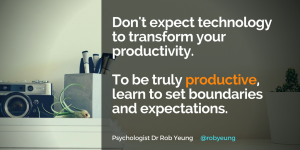 You’re busy. Of course you are. Who isn’t these days? The topic of productivity came up on several occasions with different individuals I’ve been coaching recently, so I thought I’d share a handful of tips and insights.

1. Batch your work (and life) tasks
During your working day, do you respond to emails as they come in? Or do you prefer to wait until you have a large number of emails before dealing with them all at once?

If you want to be more efficient, I strongly suggest that you take the latter approach. Why?

But if you iron 5 shirts in one session, you only have to get the iron and ironing board out once every week. Makes sense, right?

Dealing with a number of similar tasks in one session is called batch processing. And evidence suggests that it is much more time efficient – especially from a psychological point of view.

There’s an argument that mentally switching from one task to another (e.g. answering a phone call, dealing with 2 or 3 emails, taking a moment to speak to a colleague face-to-face, going back to a half-dozen emails, and so on) means that we actually lose productivity every time we switch from one type of task to another.

So if you want to be more productive, aim to batch your tasks. Check your emails only once every 2 hours perhaps. Wait until you need to make several phone calls before you make your first call of the day. If you can, schedule meetings back-to-back. And so on.

2. Respect your unique ways
I’m sure you’ve come across articles telling you that successful people all get up at 6am or 5am or 3.30am or whatever. But just because that works for some people doesn’t mean that it will work for you.

Psychologists have discovered that people can be divided up into different groups based on something called a chronotype. So some people tend to get up early and go to bed earlier; others get up later and are more productive later in the day and evening.

So don’t force yourself to get up early if that doesn’t work for you! Respect your chronotype and your psychological needs. If you get more done by sleeping in and doing more later into the evening, then do that.

3. Set boundaries
Productive people say “no” at least sometimes. When people phone you or turn up at your desk with questions, you may be inclined to answer their queries or do work for them immediately. But that probably isn’t great for your own productivity.

Yes, there may be occasions on which you need to help them there and then. But if you’re working on something that requires your concentration and you feel that your colleague’s or customer’s query could wait a little while, then try to say “no” occasionally – or try something along the lines of “I’d like to finish this report/spreadsheet/presentation/etc. at the moment. Can I come back to you in 30 minutes/an hour/this afternoon/tomorrow please?”

Remember that being super-helpful to other people may mean that you don’t get all of your own work done. You help others but you may sacrifice your own productivity and career advancement! So get used to saying “no” or “not right now” sometimes.

4. Capture productivity tips and new behaviours in a master list
This is something that I recommend to quite a few clients. Every time you want to try a new behaviour, habit or practice, write it down in a document that you’ll keep forever. That could be either a digital document or some kind of physical journal or notebook.

Then, whenever you try something, go back to your notes and make a comment about the extent to which it helped you. For example, if you tried a new way of working for a few weeks but you really hated it, then explain to yourself in writing why it didn’t seem to work for you. But don’t delete the original note. You want to preserve it so that you don’t repeat the mistake later on. Or, if you later decide to try a variation on that old idea, you can see where you went wrong in the past.

So especially if you keep online or otherwise digital versions of your action lists, don’t delete them. I recommend using the option. That way you can still read what you tried the first time around.

5. Use technology wisely
There are literally thousands of productivity apps out there. But I only use a handful that I feel make a real difference to the ways I can work. I use Pocket to save articles that I want to read later, perhaps on a different device. So for example I can save a link online from my desktop and read it later on my tablet or phone.

I use Evernote to take notes on my phone while I’m on the move that sync automatically to my desktop. Of course there are several similar pieces of software, but Evernote is my personal favourite. It’s free if you can cope with connecting only two devices.

But the main point is to make sure that technology and software are genuinely helping you. If you discover that they don’t work for you, then don’t use them at all.

But remember: see what works for you – see point 4 above. And if something doesn’t work for you, make a note of it in your master list so that you learn and can try something else in the future.