4 habits of people who appear to lack confidence 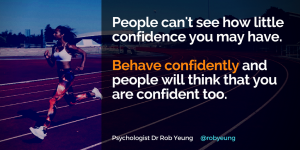 When meeting them, I often notice particular behaviours that signal their lack of confidence. Do you ever fall into any of these four traps?

1. Apologising unnecessarily or exaggeratedly
Of course it’s a good idea to apologise if you have genuinely harmed or inconvenienced other people. But don’t overdo it. For example, I have a client who often turns up for coaching sessions around 10 minutes late. When she eventually arrives, she usually apologises not just once or twice but multiple times.

Don’t get into the habit of apologising in a way that doesn’t fit the misdeed. It’s likely that one simple, heartfelt apology should be enough. Over-apologising may backfire by reinforcing in the other person’s mind your fear and insecurity.

2. Sitting in a timid position
When coaching clients, we usually sit together across a small table or together at one end of a larger table. But less confident individuals often sit with their hands in their laps. That’s fine for meeting with me. But it can be a bad habit when they sit with colleagues, interviewers or potential dates as it signals low confidence.

3. Being afraid to ask questions
A client recently admitted that she often doesn’t like to ask questions during meetings at work because she doesn’t want to expose her ignorance. We discussed a couple of situations when this happened recently, and it struck me that she was not the one at fault. It was her colleagues who had jumped to the wrong conclusions. If she had asked questions about how they had reached those conclusions, she would actually have been right.

And then he stopped talking.

Technically speaking, he did answer the question. But a more confident candidate would automatically have provided a paragraph in response to the question rather than a mere phrase.

After a bit of work together, he changed his answer to: “Yes, I’m a good team player. For example, I know that one of my colleagues Adam is struggling a bit with the analysis portion of a project. So I’ve been making an effort to drop by his desk a couple of times a day. He’s a nice guy so we chat for a few minutes and I ask him how he’s getting on. More often than not, I can offer him a helpful steer quite quickly.”

Have the confidence to speak fully. Whether you’re in a work situation or on a hot date, don’t just give the briefest, most minimal response you can.