4 adjectives that will make you happy (but tired) 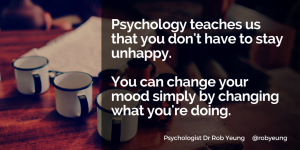 What makes you happy? You can probably list a few things straightaway. But it turns out that quite a lot of behaviour has the potential to make you happy.

A pair of researchers at the University of Helsinki recently conducted a clever study looking at the effects that different behaviours had on people’s mood. The investigators asked several dozen people to report on their behaviour five times a day over the course of twelve consecutive days. At 9:30am, 12:30pm, 3:30pm, 6:00pm and 9:00pm, the participants received reminders on their personal smartphones asking them to complete a number of psychological questionnaires.

To begin with, the participants were asked to rate on a 7-point scale (where 1 = “not at all” to 7 = “very much”) the extent to which they felt certain adjectives had been applicable to them in the last hour or so. These included:

Next, the participants were asked to rate their current mood, stress and energy levels. So they were asked questions such as:

The researchers collected 2,328 individual pieces of data and quickly observed some trends. When participants said that certain adjectives described them, they tended to feel happier.

Care to guess which adjectives from that list of eight were most related to being in a good mood? Four of the adjectives predicted their immediate mood. Go on. See if you can figure out which adjectives most predict feeling positive.

Coming back to those adjectives, the researchers found that “creative” and “compassionate” were unrelated to mood or fatigue. “Kind” was not related to mood either. Perhaps surprisingly, feeling “relaxed” did not benefit people’s mood either.

Instead, “talkative” and “sociable” helped people to feel in a more positive mood. In other words, spending time with other people and chatting helped people to feel better right there and then. Even having a quick conversation with a friend over the phone or chatting to a shop assistant while you’re shopping for groceries could give you a quick boost.

Similarly, “productive” and “responsible” also helped people to feel more positively. Perhaps that’s surprising. Doing the right thing, working on a work project or study assignment doesn’t sound like much fun. But actually, one of the surprising things from psychological research is that engaging in challenging work or even just doing what we know we should in life actually helps people to feel good.

So, what can we learn from this important piece of research?

The first lesson is that your mood is very much within your own control.

If you want to have a good day, be sure to plan for some activities that will allow you to feel “talkative” and “sociable”. That can mean different things to different people. For some people, that could mean going out with a dozen friends. For others, that could mean simply meeting up with one friend for a quiet conversation.

Similarly, to boost your mood, plan in some other activities that will allow you to feel “productive” and responsible” too. Again, that probably means something different to you than it might to other people. Perhaps that means catching up on household chores, balancing your budget, doing a good chunk of work or something else.

However, understand that you may feel a bit more tired later on as a result of engaging in “talkative/sociable” or “productive/responsible” activities too. But isn’t that a price worth paying in order to feel happy?