3 and a half ways to boost your learning and skills 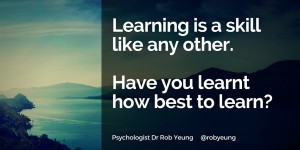 Management writers often talk about the fact that we live in an increasingly VUCA world (which stands for Volatile, Uncertain, Complex and Ambiguous) and I think that few people would disagree with that. In this chaotic and every-changing world, one of the best things we can do to future-proof our careers is to keep learning.

So that may be about doing more reading or doing some of the excellent (and often free) courses available online. Perhaps you need to pay to gain a diploma or master’s degree. Go on a training course or just ensure you are learning new skills on the job.

Based on psychological science, here are three and a half proven ways to be as productive as possible and get the most out of your studying and learning:

Say you have a week to learn something and you decide that you can devote no more than 7 hours to studying a topic. Maybe you are studying simply for your own learning – or perhaps you have an exam on Monday morning. Would you be better off doing one hour of reading a day? Or doing all of your reading in one session of 7 hours?

Suppose you have all of Sunday afternoon to learn your two different topics. Should you do say 2 till 4pm on one before doing 4 till 6pm on the other?

Perhaps somewhat counterintuitively, research studies suggest that we would be better off switching between the two topics more frequently. So that might mean doing an hour of one before switching, and then alternating the two again. Psychologists call this interleaving (as opposed to finishing on one topic before moving to the next, which tends to be called blocking).

This may surprise some people. After all, wouldn’t it be confusing to study one topic for an hour or even only a half-hour before switching – and then switching back and forth throughout a study session?

But the answer is no.

Where do you do most of your studying? Some people have a favourite spot such as their desk in the office or a specific, comfortable chair at home. Others may study in lots of different venues and locations: standing up on the train on the way to work, sitting in different coffee shops, in different rooms at home, in various meeting rooms at the office and so on.

Research studies suggest that the subsequent recall of information is significantly better if information has been acquired in a variety of settings. So don’t get too comfortable in any one place.

Mix things up. Change your environment and you may boost your learning.

The result: divers who learnt on land did better in subsequent tests on land. Divers who learnt underwater did better when tested underwater. In other words, if you learn something in a specific setting, you tend to do better if you later get tested in that exact same setting.

These three and a half pointers are backed by a lot of psychological research. Feel free to share them. And do let me know how you get on with them!