Trust in advice that WORKS 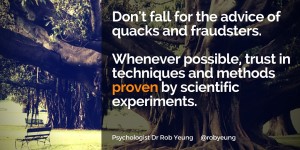 When it comes to reading psychological advice, how you can know what will work and what won’t?

To explain, let me tell you about my last cold. I just got over a cold and cough that lasted around two weeks. When I met a friend for coffee at the weekend, she said that she hardly ever gets colds because she gargles with water regularly – and she suggested that I should do the same.

So here’s the question: how would you know whether any intervention would work or not?

I think I got 3 colds last year. So one approach would be to gargle regularly this year and count the number of colds I get. But really, that wouldn’t tell me anything. Suppose that I get 3 colds in the coming year. Would that mean that gargling had failed to protect me? But you could argue that I might have had 4 or 5 colds if not for the gargling.

Actually, this precise experiment has been done. A team of researchers monitored 387 healthy adults over the course of a winter. The participants in the study were split into one of three groups:

Over the course of the study, 130 participants were diagnosed with an upper respiratory tract infection (URTI). On average, the group that did not gargle got 0.26 URTIs per 30 person-days. In other words, one single person over the course of 30 days had a 26 per cent chance of catching a cold.

Over the course of a year then, that means that people who gargle three times a day should be 35 per cent less likely to get colds than people who don’t gargle.

Now, one implication is that gargling with plain water – you don’t need to add antiseptic or salt or anything – could reduce your chances of catching a cold by around a third. But coming back to the point of this piece, it is only by running this kind of experiment that you can tell what works for your psychological well-being and success too.

So the next time you read or hear about some new, supposedly amazing technique or method for boosting your performance or improving your life, ask yourself: has this method been tested by reputable researchers in a scientific experiment and published in a scientific journal?

I’m a sceptic. When it comes to my health, well-being and livelihood, I don’t trust advice unless it has been tested and proven to work. And that’s why in books such as How To Win, How To Stand Out and You Can Change Your Life (as well as others), I try to base my recommendations on scientifically tested evidence.

Of course, there are other writers who base their thinking on scientific research too. So I strongly recommend that you seek them out (and not the rest of the crowd).