A simple trick for influencing and persuading people 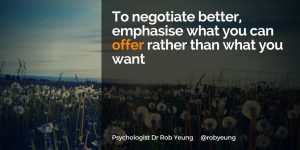 Imagine you’re trying to sell something that you own, something like an older computer, for example. Consider the two ways that you could phrase your request:

Yes, of course they do. Both imply that the buyer will get your computer in exchange for £600.

But it turns out that one phrasing is significantly more persuasive than the other. Care to guess which?

Before I tell you the answer, allow me to explain what this is all about. Psychological studies often teach us that even tiny changes in behaviour or language can have powerful effects on the people around us – you’ll know this if you read my book I is for Influence. And this is an example of something called request framing.

Psychologists say that framing occurs when you phrase a statement in a different way that seems to have the same meaning, but actually has a different effect on people’s behaviour.

In a study led by Roman Trötschel at Leuphana University in Germany, researchers found that the framing demonstrated in the first version of the sentence (“I’ll offer you £600 for my computer”) led to more successful negotiations than the second version.

Now, those two sentences were clearly uttered by a seller looking to get money from a buyer. But what would happen if it’s the buyer who is initiating the negotiation?

The researchers ran a couple more experiments and found that the same thing happened. Buyers were more likely to secure deals when they framed their requests by saying “I’ll give you £900 for your car” than when they flipped the offer around by saying “I’d like your car for £900.”

In further experiments, the researchers established that participants were significantly more likely to secure deals when they began their statements in terms of what they were offering rather than what they wanted. The researchers even found that the effect works on children who were swapping trading cards – so this may be a technique that you could apply to getting your kids to listen to you more too!

Beginning by speaking about what you offer rather than what you want may seem like a rather minor difference. But that’s the whole point of framing. Framing involves stating essentially the same thing, but in a way that is phrased to generate a better outcome.

Whether you’re buying or selling something, start by talking about what you offer rather than what you want.

I’m sure you get the point. Whether you are buying or selling something, always begin by mentioning what you are willing to offer to the other person.

I is for Influence influence negotiation persuasion