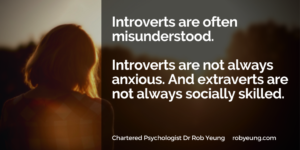 Here are 5 myths about introverts:

1. Introverts can’t be confident
It’s true that introverts may appear less socially confident – introverts don’t tend to seek out crowds and busy social situations. However, introverts can be very comfortable and confident within themselves.

2. Introverts aren’t socially skilled
Introverts don’t tend to seek out situations in which there are lots of people and a great deal of in-person interaction. But that doesn’t mean that introverts do not have social skills. I know plenty of introverts who can engage with colleagues, customers or friends – and schmooze, persuade and come across as warm and likeable.

For example, I have a colleague who can run workshops with literally 100 people in a conference room for days at a time. He can sit at a dinner table with a dozen clients and regale them with interesting stories. But on evenings and weekends he rarely socialises – he just likes to spend time with his wife and two daughters. So, despite being fairly introverted, he can be socially skilled when he wants to be.

Generally speaking, introverts tend to have less developed social skills as they don’t tend to seek out social settings – they just have less practice at it. However, introverts can develop strong social skills – through effort and coaching – to use when the need arises.

3. Introverts don’t like to seek attention
Extraverts tend to put themselves forward in social situations much more than introverts. However, there is a minority of introverts who do like attention. Some introverts can have narcissistic tendencies.

So, it’s entirely possible for people – and I’ve come across quite a few – to be fairly introverted but also narcissistic. They don’t like to hang out with lots of people. But when they are in a group, they try to take charge because they think they are better than everybody else.

4. Introverts are quiet
Some introverts can be quite talkative. In general, introverts just tend to be more choosy about when they wish to speak up.

So, it’s not true to say that introverts are always quiet. They can be loud with the right people – or when they make the effort to do so.